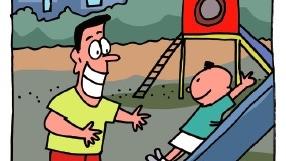 I remember once seeing a little girl dressed like a princess kick and scream at her mother and grandmother on the sidewalk over five years ago. I don’t know what she was shrieking about, but I remember her rage

When you live in a metropolis in China, the weekends can get a bit crowded. An 18-minute cab ride winds up being an hour, and the wait to get dinner at restaurants can get so bad that you might actually want to get a snack to tide you over until you get a table. One reason for this is that weekends are family time, at least, that is what I have come to think of them.
Things take longer on the weekends because that is when all cars are allowed on the road – on weekdays, there is a system where 20 percent of private vehicles are off the road each day – which means families are more likely to take their children, and sometimes extended family out, for dinner. After all, it is likely to be the only time young parents have to spend with their children.
Sometimes I get frustrated with the delays, but one of the things that never ceases to bring a smile to my face is the dads out with their kids. I love seeing them interact with their sons and daughters. They speak to them like the little humans they are, capable of thinking and reasoning. I also like hearing the interplay between parent and child. It reminds me of myself growing up.
When I just arrived in China several years ago, I heard about the little emperors: children who become spoiled due to overindulgence because they are the only child in a household of six adults with money to burn. I remember once seeing a little girl dressed like a princess kick and scream at her mother and grandmother on the sidewalk over five years ago. I don’t know what she was shrieking about, but I remember her rage. I also remember thinking how embarrassed the adults must feel and that there was no way I could have shamed my mom like that in public.
Today, things seem to be changing, and I am happy to be a witness to it. I am noticing more men out with their children, and not just women and grandmothers.
It appears that the men have realized that they need to be present in the child-rearing too. Recently, I accompanied a friend to the emergency room to get a cast, and while waiting for the nurse to come with the items, I asked the doctor what he did for Father’s Day. His face lit up as he described what he did; his pleasure at spending time with his child was palpable. I could tell that he is a good and caring dad and not just a provider.
Another phenomenon that is occurring in metropolises in recent years is the stay-at-home dad. I don’t know any of them personally, but I have read about these men who give up their jobs to take care of their children so that their wife can pursue her passion. I applaud any man who is willing to put his needs second to that of his wife and child. I know it cannot be easy in a society that is so unused to men playing what is largely considered to be “the female role.”
Sociologists say the home is the first place that children learn social norms: what is acceptable behavior and so on. And absentee fathers and fathers who work all the time and have no time for their kids can have a negative impact on their son or daughter.
Paul Amato, a sociologist who studies parent-child relationships at Pennsylvania State University, found that “When fathers are actively involved with their children, children do better.” I am no sociologist, but that seems to be what is playing out in the restaurants and shops across Beijing on the weekend.
Amato’s research also found that “Father involvement is positively correlated with children’s overall social competence, maturity, and capacity for relatedness with others.” If this is true, it bodes well for the Chinese men and women of tomorrow. It’s also high time that the women get some help.