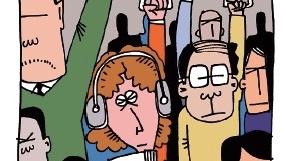 Stress and the City

When you ask Shanghai natives and lifers who have spent years navigating the big city blues, everyone has their own way of making it through the madness

It’s 8:30am on one of those classic Shanghai summer mornings where the rain relentlessly beats down on the streets and The Boomtown Rats “I Don’t Like Mondays” blares through my headphones (I know, I’m a walking cliché). The metro carriage I’m sardined into is 3,000 degrees, my nose is nestled firmly into the moist armpit of the nice man beside me, and an umbrella of unknown origin jabs my side with every jostle of the train.
As we pull into the next stop, I give my best “back-off” glare to the wannabe passengers standing on the station platform weighing up the mess in front of them that is my–and many of my fellow commuters’ – living nightmare: Line 2 at rush hour. The scrum ends seconds later, leaving the occupancy of the carriage essentially doubled and my arm unnaturally twisted behind my back with the umbrella sinking further into my ribs. Sigh.
It’s no one’s fault, of course. Everyone hates rush hour on the metro for good reason. But it’s all part and parcel of living in this amazing city that also happens to be home to 26 million (26!) other people and one of the busiest metros in the world. Peak travel times are basically guaranteed to be completely awful – particularly the cursed Line 2, and especially since the introduction of QR code tickets that in my experience can cause queues that snake out to Suzhou. Still, it’s not alone in raising blood pressures across the city.
Shanghai attracts Type As like a moth to a flame. It sucks in passionate people who martyr their way through 80-hour workweeks, precious hours of sleep disrupted by a constant flow of work-related WeChat messages, 6am construction at weekends, and car horns. Crippling rent payments take up the majority share of paychecks and landlord evictions come with vague and unspecified reasons. Then there’s the hazy polluted days, oppressively humid summers, and dank winters that make up an unfair share of the weather.
Many in Shanghai thrive in this environment, rolling with the punches of mega-city living without a grumble – we’ve all seen and internally questioned the masochist smiling on the metro at peak hours. But for others, it comes to a head with the inevitable burnout before moving onto something more akin to rural idyll.
While I like to think that I settle somewhere between the two – one of those people who wears the daily stresses like a badge of honor while maintaining an aura of calm and togetherness – my close friends privy to my rants and chewed down nails arguably tell a different story.
When you ask Shanghai natives and lifers who have spent years navigating the big city blues, everyone has their own way of making it through the madness. Some suggest exercise, cutting back on caffeine, counseling, mindfulness, deep breaths, investing in noise canceling headphones, classical music, walks in the park… Others preach acceptance of what can’t be changed, focusing on all the positives, and just remembering that hey, we’re all human.
As I battle my way out of the torture tin can that identifies itself as a metro, disheveled but relatively unharmed (except my umbrella-battered rib cage), I try to channel those bits of advice. Sliding my way through a sea of sticky commuters, I tell myself that we’re all in this together, and that it’s better than the alternative of sitting in car fumes for hours in traffic. The mantra carries me the whole way to the exit light at the end of the tunnel without so much as an eye roll. Amy – 1, Shanghai Metro – 0.
Covered in puddle water from passing cars and running late for work, my next battle comes at the coffee shop. When the queue hits the five-minute mark, I catch myself shooting daggers at the person in the front of the line leisurely lingering over a choice of iced or hot coffee, before fumbling through apps to find a QR code to pay. In a bid to keep my cool, I remind myself of all the times I’ve held up queues: rifling in my purse for cash, struck by indecision at the last minute, distracted by something on my phone… We’re only human, right? Let it go.
Non-stop, intense, and in your face in the best and worst ways, there’s no denying that Shanghai is stressful and we all need to find our own way of working through it. For me, for now at least, I think I can change my mindset towards the daily stresses of the city with those little reminders. But still, you probably won’t catch me smiling on the metro–if 8:30am was a scrum, 6pm is a full-on rugby tackle.