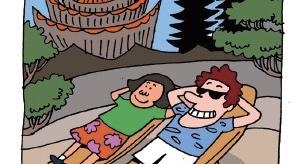 In the past we never would have bothered, because the old permits required permission from the neighbors, the village governor, the local police chief, and more. By the time we had lined up stamps from all those people, we would have been ready to retire

By Chris Hawke Updated May.12

Renovating my old courtyard home in a Bai village in West China only took eight months, which is pretty good considering that at the beginning there was a single board that had been haphazardly wedged into place bearing the weight of half the roof.
Before renovations were underway, I’d peek around the corner every time I came hoping to see if the roof had collapsed. During the renovations, I was fearful for the safety of workers. But now when I look, I see a magnificent old building, prouder and in better condition than it ever was.
Sometimes the status quo seems like a permanent condition. As the building was going on, I felt like I was starring in Waiting for Godot, trapped for eternity on a never-ending construction project, working freelance jobs for 12 or more hours a day in a frantic effort to keep up with the cost overruns.
But just as the seasons pass, the courtyard is finished, and everything here has changed again.
There are guests. Fresh baked pizza in our new oven. No more arguing over who is in the bathroom too long because now we have three of them.
The place is now so beautiful that we have decided to set it up to host events. In the past, we would have simply opened the doors. But things are changing in China, and we decided to get a business license.
In the past we never would have bothered, because the old permits required permission from the neighbors, the village governor, the local police chief, and more. By the time we had lined up stamps from all those people, we would have been ready to retire.
But the central government is pushing to make it easier to do business, and as a result the local commerce bureau has streamlined the application process. We received a permit in just a few days with no fuss.
However, for me to get permission to work at the new event space, I needed to get a permit from the culture bureau. And for that, I needed a fire permit from the local police station, which is also in charge of fire safety.
The police chief flat out refused to give me a fire inspection, because I did not have a stamp from the village governor, my neighbors, and, of course, him.
An interesting phenomenon has happened in Dali since China began its drive to stamp out corruption. Officials are terrified to take bribes, and won’t do it. On the other hand, they have no incentive to do their jobs. After all, if this police department issued me a fire permit, and there was a fire, they could get in trouble. The logical course of action is to do nothing. The central government has a term for this tendency, lan zheng, and is actively fighting it.
Anyways, situations that seem hopeless are not permanent. We had a friend in the village who faced the same problem, and she went to the mayor, who sorted out the problem. In our case, we waited for the actual fire marshal to return from vacation, and he did an inspection. Things change, and usually for the better.
It’s a human tendency to feel like the way it is will be the way it will be forever. Relations between my wife and I seemed pretty grim at the height of the renovations, when costs were exploding, we had strangers in the house every day and every crevice was full of dust.
Now, the value of the place has gone up fivefold. People love the home, and speak as if we’re some sort of visionaries. This too will be a temporary situation.
My wife and I relax in the sun, and enjoy the fruits of our labor. The pressure is off and things are good.
Right now, as always, there is a lot of tension in the world. Acrimony over who said what to who when. Concern about whether people’s taxes are going up or down. People debate over these things like they are a matter of life and death. But they are not. Things in this life change so fast, and everyone always seems surprised.
Personally, looking back over my 12 years in China, the changes are incredible, and hard to imagine. The old people in this village have seen much more – their world has essentially been thrust from medieval conditions to modernity in one lifetime.
The world is changing, but many people are holding tight to what they have, instead of trying to build a new society for everyone that will meet the needs of tomorrow. Things are going to change faster than anyone can imagine, and if we are wise, for the better. That can only happen if people see that the situation now won’t last forever.