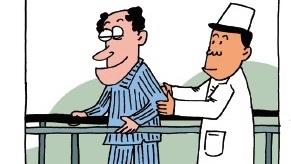 My friend’s assistant, Mrs. Wang, became something of a celebrity. Who knows if there’d ever been a foreigner there before. But he had strange ways, like wanting coffee in the mornings, and not wanting to listen to the TV blaring Chinese soap operas day and night

By Kathleen Naday Updated May.11

I’ve been spending a lot of time in rehab recently. It’s not what you think. A friend had hip replacement surgery, and after being booted out of the hospital after four days, he landed in a physiotherapy rehabilitation facility.
This was physical therapy on an almost industrial scale. I was jealous – some years ago, I was knocked over by a van. As I flew through the air, I thought, “so this is what being knocked over feels like.” Followed by some other thoughts. My knee was fractured, ligaments torn, but I was relieved. It could have been so much worse. I was crossing with the green light for pedestrians, but that means little in China, as vehicles are still allowed to make a right turn. I blamed myself for not being halfway across before the green light came, but it was cold, and I was in a hurry to get home. I had just been shopping, and my groceries were strewn across the road. The van driver, a young man delivering food, was in more shock than me. I asked him to pick my groceries up – imported treats are not cheap in China – but he needed urging from the crowd of middle-aged pedestrians who had gathered around.
“She says, ‘pick up her groceries and drive her home,’” they told him. Later, at the hospital, the diagnosis was rest and put your leg up. But that was bad advice, and weeks later, I still couldn’t walk. I returned to the hospital armed with back-up from a Chinese friend, and insisted that I was referred to the physio department. Two days after starting, I could walk again, although the delay in treatment meant that it really took years to recover properly.
My friend’s rehab facility was quite startling. In the middle of an ordinary residential community, it was full of people – post-surgery like my friend, people suffering from strokes, heart conditions, recovering from accidents. Most are elderly. My friend was the only foreigner. Word got around instantly. I walked in, and everyone knew where I was going.
Each room had two occupants, plus an assistant–a man or woman, usually hailing from outside Beijing. They also lived in the room, 24/7, seven days a week, looking after their patients’ every need. The assistants slept on a chair that could be pulled out to form a makeshift bed. It was hard as a rock. My friend’s assistant, Mrs. Wang, became something of a celebrity. Who knows if there’d ever been a foreigner there before. But he had strange ways, like wanting coffee in the mornings, and not wanting to listen to the TV blaring Chinese soap operas day and night. Eating lunch and dinner much later than Chinese people are used to, and not wanting to fall asleep at 9pm.
His roommate, Old Jiao, was a major source of irritation. “You musn’t tell him you can speak Chinese,” my friend gave strict instructions before we visited. Old Jiao was desperate to talk. He was in because he kept falling over. It was a constant battle with him trying to escape outside to smoke, and keeping him inside. Mrs. Wang stood up to him, speaking sternly and pointing her finger as she insisted she knew better what was good for his health. Old Jiao meanwhile also had celebrity status, as the roommate of the foreigner. At visiting times he would hover, to see what you would do, what strange food was brought in to eat. I have never seen my friend be so patient in his life with the intrusion into his privacy, with having to listen to Peking Opera or Chinese love songs being blared out from a cellphone, and being told what not to do constantly.
The physio sessions were extraordinary. At changeover time, a phalanx of wheelchairs waits in the corridor, by the elevator. Other patients finishing their sessions are wheeled out, or helped out. There is an extraordinary array of contraptions – I hadn’t seen these things when I had my physio 10 years before. Harnesses suspended over treadmills, walking machines that turned people into half robots and massage beds. There’s one machine that’s a cross between an arcade shoot-em-up video game and a medieval torture device – the one where they stretch people out.
There must be at least 30 or 40 people having physio at once, but everyone knows which bit of equipment they are using. If I could have come to such a place, I thought, I would have been walking very quickly after my accident. I wouldn’t have got a month off work though.
One day, a foreign expert came to the rehab. He told my friend that despite everything, the approach was still too conservative, and he should just start walking around. So he did. One of the doctors was a hold-out on the advice, but it didn’t seem to matter.
Just before my friend checked out, now able to walk at quite a fair clip, Mrs. Wang suddenly had to return home. Her own husband was sick. But she remained jolly till the end, and it was sad to see her go. At least, when she got home, she would be able to talk about her celebrity foreign patient and his strange habits.