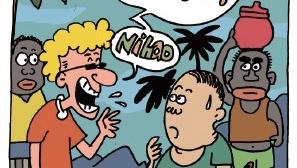 After so many years of unsolicited introductions across China on mountain tops, in ancient temples, ferry dormitories and countless public toilets, a part of my brain could just have decided it’s fine to strike up a conversation anywhere with Chinese people

I keep scaring Chinese people in Africa. I can’t help it. So far it’s always ended fine, with confusion the worst outcome and sometimes even pleasure, whether or not it’s genuine. After years of living in China, I just can’t help uttering an unsolicited ni hao (hello) on the streets of Francophone West Africa.
Living in China, I was the outsider. Barely a day goes past without being referred to as a foreigner. The cries of waiguoren (foreigner) or the gentler laowai (old outsider) ring out when you wander outside the biggest cities.
Spending time in Africa, I’m a different kind of outsider. Here I’m assumed to be French, and that’s got very different associations to being a European trotting about China. While I felt more foreign in China than I do here, I’ve crossed the floor in my relationship with Chinese people to be co-outsiders.
The problem is, people here don’t know that when I approach. How could they know my backstory when I just start talking to them in Chinese on a street, on the beach or more usually in a bar?
There’s always a pause. But there was always a pause in China when it was me starting a conversation. Usually just a momentary lag while my interlocutor’s brain processed the fact that a foreigner was speaking some Chinese. Occasionally the lag would continue as my victim’s conscious brain failed to process the fact I was speaking Chinese, even though their subconscious would engage in a conversation about the cost of a bottle of water or whereabouts of a youth hostel.
Here we don’t even have the context of actually being in China. The confusion generally melts into a smile, sometimes having to pass through the stage where I’m assumed to be a spy.
There’s a general sense of camaraderie, of being in the same boat. Many Chinese people I meet here, if not instantly scared off, turn out to be doing a stint abroad for a Chinese enterprise they were already working for. This period in a hardship post is a good way for progressing up the career rungs once back home. Not many people stick around.
On my part, I’m also concerned that my former hosts don’t run into any problems here, not as though I can really do that much to help. Somehow, I’ve started to feel quite protective over out-of-context Chinese in a way I wouldn’t for a fellow Brit, or not so readily. After so many Chinese people coming to my aid I feel duty bound to step in. After being the guest for so long, that anxiety to reciprocate has got out of hand and comes out as over-zealous conversation starters about how hot it is.
My attempts at unwarranted chats could also be construed as a sort of revenge. After so many years of unsolicited introductions across China on mountain tops, in ancient temples, ferry dormitories and countless public toilets, a part of my brain could just have decided it’s fine to strike up a conversation anywhere with Chinese people.
One particular situation has brought me full circle with learning Chinese. Back when I first embarked on learning the language, China was a very different place. More different still was people’s understanding of the country. So when I told people at home in England I’d be learning Chinese, the most common response was “is that so you can order a takeout?”
Of course, little did they know the economic superpower China was on its way to becoming. But even littler did they know that learning Putonghua wasn’t all that useful when it comes to ordering in Cantonese-speaking restaurants in the UK.
Fast forward nearly two decades, and while I do still use Chinese sometimes for work, those naysayers back home are now much closer to being right. Ordering food is now perhaps my most life-preserving use of Chinese.
Chinese restaurateurs follow in their neighbors’ footsteps and modify their menus for West Africans’ tastes and expectations of Asian food. Nothing gives me greater pleasure than rejecting the French-language, Indochine-inspired menus and asking for the Chinese ones. Nothing, but the food itself.
Requesting the Chinese menu sets off a whole different chain of operations in the restaurant. A Chinese manager or owner appears with the menu to see what’s what. Conversations about what dishes are working with what local ingredients ensue. I inevitably over-order. Chopsticks appear and the staff come for a chat. Connecting on WeChat already feels as nostalgic for them as it does for me.
My need to blurt out Chinese could be soon coming to an end. For not only are there a good half dozen Chinese restaurants, but a Chinese medicine center with traditional massage. With the correct foot soak herbs and massage routines, the staff might ease some of my China anxieties and soak up my excess chat, leaving the other poor unsuspecting Chinese nationals free to go about laying foundations and building bridges.