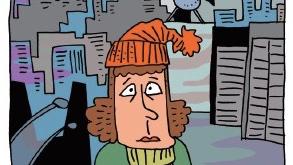 On the first day of the break, my neighborhood looked like something out of a movie, specifically the opening of a post-apocalyptic movie where the scene is set as the camera pans through empty streets of a ghost town lined with blown-out cars and discarded shopping carts

Spending the majority of my formative years between a series of quiet and comfortable sleepy English towns where life moved at a pace best described as steady – except perhaps once a year when Boxing Day sales madness ensued – like many I was sucked in by the bright lights and big prospects of China’s major cities. And like most, I had little idea what was in store – the moral of Aesop’s fable about the town and country mice ringing in my mind – isn’t it better to have a quiet and peaceful life in the country than one always chasing something better but constantly living a stressful life in the big bad city?
Fast-forward a few years and a series of teething issues (the usuals – a couple of scams and a constant fear that mold could take over my damp flat at any minute) during time spent in both Beijing and Shanghai, and I’m pretty sure I’m addicted – or at least, I’ve irreversibly adapted – to the lifestyle.
The realization that mega-city living had changed me more than I thought dawned on me over Chinese New Year, when Shanghai ground to a halt. What felt like the entire population of Shanghai, except for me and I’d guess around five other people, packed up and either returned home to visit family or ventured to lush Southeast Asian islands to ring in the Year of the Pig for the weeklong national Spring Festival holiday. Overnight, the city’s lifeblood had drained, the pulse slowed and its heart almost stopped beating… Or something slightly less dramatic, but you get the picture.
On the first day of the break, my neighborhood looked like something out of a movie, specifically the opening of a post-apocalyptic movie where the scene is set as the camera pans through empty streets of a ghost town lined with blown-out cars and discarded shopping carts in the middle of the road and a few zombies for good measure – only my shopping cart was a collection of share bikes, my zombies were a few sleepy holidaymakers who stuck around in the city, and the odd car still screeched by now free from the traffic that usually jammed up the roads.
There was no rush in the rush-hour commute; the scrum for the last seat on the subway was swapped out with row-upon-row of free chairs across a series of largely unoccupied carriages; the crush for the office elevator became a lonely ride for one in a totally abandoned office block – save for one very bored security guard; heaps of stores, restaurants and street-food stalls were completely closed up with shutters rolled down.
Now, I get nothing about this seems horror-movie sinister, really. In fact, it probably sounds quite nice, the idea of finally having some downtime in a city that never really stops, but there was something about it that just didn’t sit right. The usual city soundtrack–that constant background buzz of scooter horns, car engines, construction and traffic whistles – was gone. It was replaced with a silence that I had often longed for during early mornings of relentless construction, or as an unwitting victim of a metro attendant’s loudspeaker after one-too-many cocktails and not enough sleep, or as I was sardined into the elevator with wisps of someone’s ponytail glued to my sticky, sweaty face. Weirdly, though, that quiet now felt totally unwelcome and unapologetically deafening.
The thing is, Shanghai just isn’t supposed to be quiet. It’s a city where stress and stressors are a constant that people thrive off while working as many hours as they can muster in search of the next big career move. Sleep is put on the back-burner in exchange for an always in-flux social life as friends come and go with each swing of a revolving door, and personal space is a distant memory. And then there’s the constant battle of trying not to let the city turn you into an asshole (fact).
But these lows almost become a trade-off for so many highs, like absolute convenience and the knowledge that you can have whatever you want, whenever you want by tapping a few buttons on your phone or within a 20-meter walk of where you live. Job opportunities come thick and fast; trends hit hard and fade out quickly as the next big thing hurtles on in; and honestly, I can’t wait to see what magic the city will be able to work with mobile technology next. Plus, living somewhere that changes so vastly from one day the next, there’s pretty much zero chance of boredom.
Honestly, I don’t really know whether I’m a town mouse for life, but it’s safe to say right now that Shanghai’s daily crush, glaring lights and cacophony of construction are my new normal, and seem far less daunting than a quiet and peaceful life in the countryside.