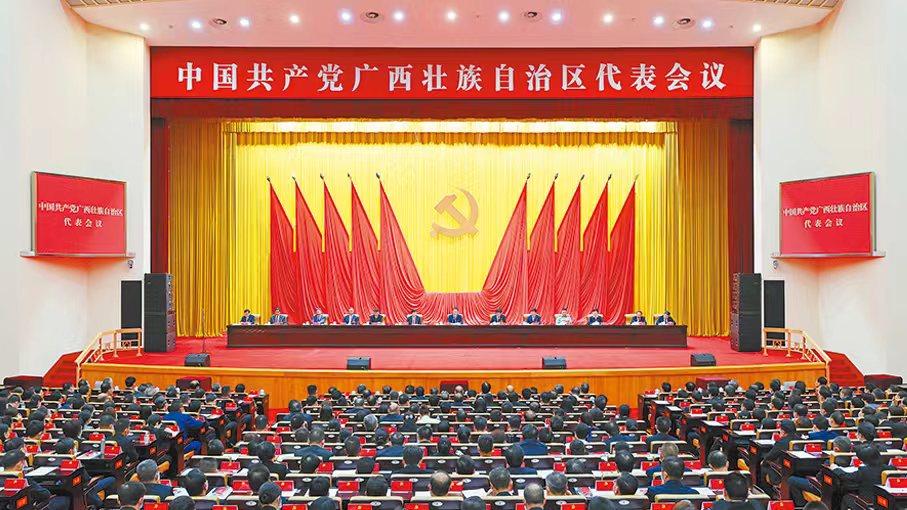 Xi Jinping, a candidate nominated by the CPC Central Committee and put to vote in the Guangxi electoral unit, was elected by a unanimous vote

The Communist Party of China (CPC) congress of the Guangxi Zhuang Autonomous Region was held in Nanning city from Thursday to Friday to elect the region's delegates to the 20th National Congress of the CPC. Xi Jinping, a candidate nominated by the CPC Central Committee and put to vote in the Guangxi electoral unit, was elected by a unanimous vote.
The vote was cast on Friday morning. When it was announced that Xi was elected unanimously, a long and warm applause burst out.
The unanimous vote of Xi represents the common will of over 2.5 million CPC members and 150,000 primary-level Party organizations in Guangxi, as well as the wholehearted support of the region's 57 million residents of all ethnic groups, according to the congress. It also shows the common wish and strong desire of the hundreds of millions of Chinese people to follow his lead toward the national rejuvenation and strive for a bright future.
"General Secretary Xi always keeps in mind the people of all ethnic groups in Guangxi. I feel especially honored and proud to cast my vote on behalf of Party members working on the ground. On hearing that General Secretary Xi was elected by a unanimous vote, I was very excited and deeply inspired. It is my honor to witness this historic moment," said delegate Ya Hanwen, director of the Jianggeng Villagers Committee, also secretary of the Party branch of Jianggeng Village, Yuhong Township, Lingyun County. Ya vowed to lead his fellow villagers to develop local distinctive farming and breeding to contribute to the country's rural revitalization drive.
General Secretary Xi always concerns himself with people's wellbeing. Under the strong leadership of the CPC Central Committee, the people have benefited substantially from favorable policies in various fields such as education, healthcare, housing and drinking water, said delegate Wei Liuchan, director of the Automation Office of the Sintering Plant, Liuzhou Iron & Steel Company, Ltd. "We believe that under the leadership of General Secretary Xi, we will lead a more rewarding and promising life. Only by working hard can we live up to Xi's expectations," said Wei.
Since the 18th CPC National Congress in 2012, Xi has attached high importance to the development of Guangxi and given important instructions for the region. During his April visit to Guangxi in 2021, Xi summarized distinctive features of the region in the country's overall development and called on the region to make progress on four fronts. He also urged Guangxi to devote efforts to four key areas of work and building the region into a majestic place under socialism with Chinese characteristics in the new era.
"As we embark on a new journey in the new era, the leadership of General Secretary Xi will surely pool greater strengths of the times and steer China towards its great rejuvenation," the delegates said confidently.
"The unanimous vote of the general secretary is what the people aspire for. Under the firm leadership of the CPC Central Committee with Comrade Xi Jinping at its core, great changes have taken place in Guangxi," said delegate Xu Hua, Party committee secretary and vice principal of Nanning No.2 High School. Xu said he will continue to perform his duties conscientiously and contribute to the development of education in ethnic minority areas.
Delegates agreed that it is essential to acquire a deep understanding of the decisive significance of the establishment of both Comrade Xi Jinping's core position on the Party Central Committee and in the Party as a whole and the guiding role of Xi Jinping Thought on Socialism with Chinese Characteristics for a New Era. They believed that Xi's core position must be firmly upheld, and so must the Central Committee's authority and its centralized, unified leadership. They expressed the need to loyally support, uphold and protect the leadership core.
We will turn Xi's caring and encouragement into concrete actions, set the stage for the 20th CPC National Congress with outstanding achievements, and forge ahead toward the second centenary goal of building China into a great modern socialist country in all respects.