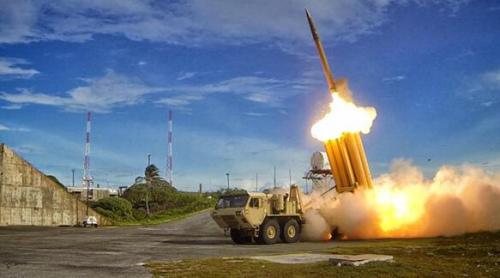 The day after South Korea and the US's announcement that they would deploy an anti-missile defense system, China voiced disapproval

Seoul and Washington announced Friday that they have decided to deploy an advanced American missile defense system in South Korea. The Terminal High Altitude Area Defense (THAAD) system is meant to ward against North Korea's growing nuclear strength. The defense system has created friction between these two countries and China in recent months, as Beijing considers it a threat to its own national security.
The following day, China's Foreign Minister Wang Yi reiterated China's stance on the THAAD system and criticized South Korea and the US for their decision, according to a Ministry of Foreign Affairs statement. "The deployment of the THAAD system goes far beyond the need of self-defense on the peninsula," said Wang. "China has every reason and right to question the real motive behind this move."
Criticizing the US for trying to "establish its own security upon the insecurity of other countries," Wang also urged the South Korean side to reconsider its decision. "We hope our friends in South Korea consider this carefully: Will the deployment of the THAAD system improve South Korean security? Will it help to achieve the peace and stability in the peninsula or to solve the nuclear crisis?" Wang also warned that without acting prudently, such decisions may turn into "disastrous mistakes."
In recent years, China has been deepening its economic and political relationship with South Korea. Seoul's decision to deploy this anti-missile defense system may damage those ties. Opposition parties within South Korea have voiced concerns over the government's latest action, claiming the defense system launch will strike a blow to relations between Beijing and Seoul.
Both North Korea and Russia have publicly objected to the deployment. Pyongyang threatened on Monday to answer this action with a "physical response." For its part, Moscow denounced the decision as "undermining" the stability in the region. Some Russian strategists have suggested that Russia should respond by deploying additional missile systems to the Far East, including the Kuril Islands, an archipelago located northeast of Japan.