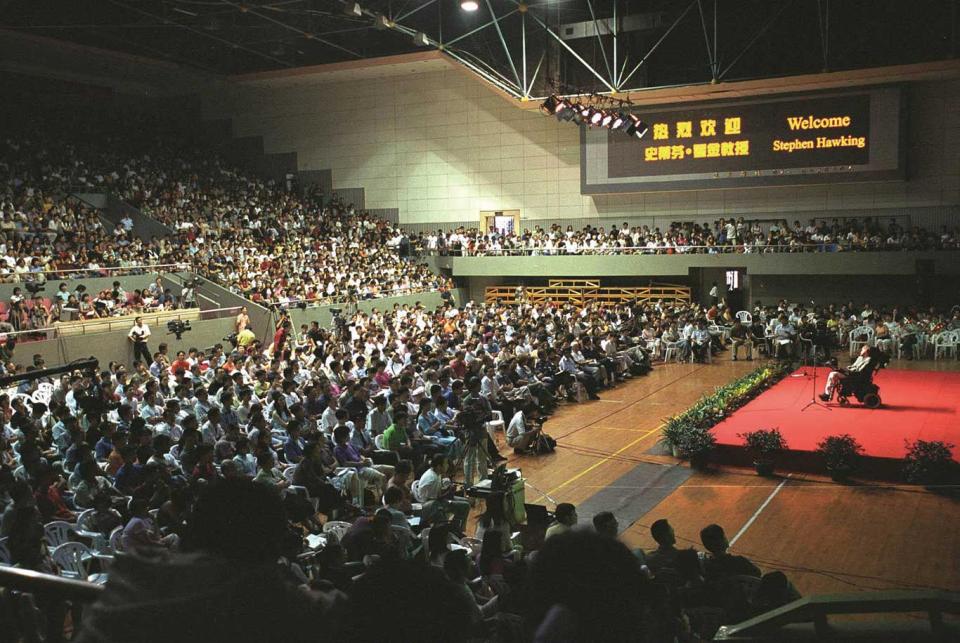 Stephen Hawking made three trips to China, even at a time when facilities for the disabled were lacking. One of Hawking’s postgraduate students, Wu Zhongchao, gives an inside account of these visits, and tells how the physicist’s popularity in China soared as a result

In 1979, Wu Zhongchao went to Cambridge University as a senior visiting scholar from the University of Science and Technology of China (USTC) in Hefei, Anhui Province. Five years later, he completed his PhD in cosmology under the tutelage of eminent physicist Stephen Hawking (1942-2018).
Wu translated several of Hawking’s renowned works into Chinese, including A Brief History of Time and The Universe in a Nutshell, and maintained a life-long friendship with his mentor.
On March 14, when news of Hawking’s death at the age of 76 reached Wu, who was then in the US state of Colorado, he was overwhelmed by a mix of feelings. Through a telephone interview, he gave an inside account of Hawking’s three visits to China.
Debut Visit
In the early 1980s, China had just started opening its door to the outside world, and many people from across the globe were hoping to visit the ancient and mysterious Middle Kingdom. Hawking was among them, but he had no idea which university was suitable to visit. Wu recommended Hawking should visit USTC, based in Hefei, Anhui Province.
Back then, USTC was considered a leader in cosmology and astrophysics research, and Hawking readily accepted. Wu told our reporter that Hawking was very interested in the visit and he even planned to visit Tibet, but he had to drop that plan because of his physical condition. Hawking suffered from motor neuron disease, also known as ALS.
In 1982, USTC sent Hawking an invitation. Back then, it was rare to even use the telephone in China, recalled Wu. “At that time China was backward and when the invitation arrived in Cambridge, it had gone moldy and black. It was not presentable, but Hawking didn’t care,” Wu said.
Hawking’s trip, however, was initially turned down by the British Embassy in China. The reason was simple – Hefei was a relatively small city with inadequate transportation which was unsuitable for the British academic, who was already confined to a wheelchair. In addition, all Hawking’s food had to be transported by air from the UK, and there was no direct flight to Hefei.
Neither USTC nor Hawking wanted to give up. Hawking insisted that as long as he could survive, he would make the trip. As a compromise, USTC invited Bernard Carr, then professor at Queen Mary University of London, who was also one of Hawking’s students, to make an exploratory trip to the university first. Before his departure, Carr invited Wu to dinner to learn more about the university and China.
In June 1983, Carr visited USTC and delivered a presentation on the anthropic principle: that the universe we see has to be hospitable, or we would not be here to observe it. When he returned home, he told Hawking that Hefei is in a universe in which he could survive.
In April 1985, Hawking made his first visit to China at the age of 43. The provincial government of Anhui Province pulled out all the stops for their distinguished visitor, accommodating him at the Daoxianglou Hotel, where top Chinese leaders, including Mao Zedong, had stayed.
Wu was then visiting several universities in Europe and the US and was unable to accompany Hawking, but he told Wu that Hefei left an indelible imprint on his mind. Wu said that Hawking later visited several Chinese cities, including Beijing, Hong Kong and Hangzhou in Zhejiang Province, but still kept the fondest memories of Hefei and USTC.
“He mentioned USTC several times in conversations with me later, probably because of the university’s academic atmosphere. Back then A Brief History of Time hadn’t been published, and all the attendees at his USTC lecture were professionals and students,” he said. 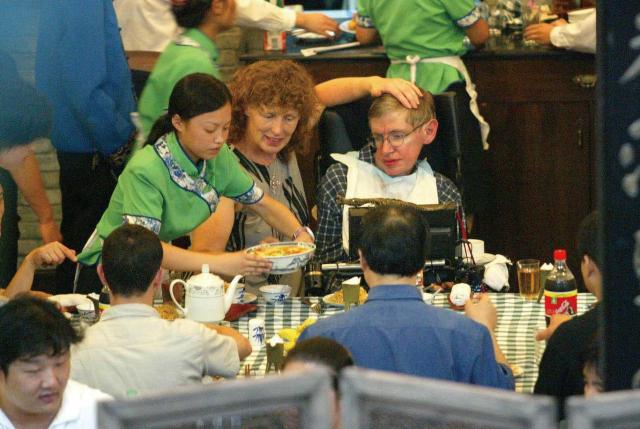 Out of the Ivory Tower
On April 1, 1988, A Brief History of Time rolled off the presses in Britain and Wu completed his translation the same year. He contacted several publishing houses in China, but none would publish it, arguing that few people would read such a theoretical work.
Hunan Science & Technology Press eventually took the bold step and purchased the copyright at the knockdown price of US$300. Wu recounted that back then, the concept of copyright was unknown to many people in China. “If the publishing house didn’t pay for the copyright, I would have paid myself,” he said.
In 1993, A Brief History of Time hit the bookshelves in China, but to poor initial sales. But after steady promotion by the publishers, media and academia, it gained popularity year after year. To date, at least one million copies have been sold in China, not including the large number of pirate copies. In comparison, even the most popular science works in China have sales of around 50,000 in China.
As his popularity grew, Hawking came to Beijing for the International Congress of Mathematicians at the invitation of famed Chinese-American mathematician Shing-Tung Yau in 2002. In Beijing, Hawking was accorded a cordial reception by then Chinese president Jiang Zemin.
At the invitation of Zhejiang University, Hawking spent one week in Hangzhou, capital of Zhejiang Province. Unlike the trip to Hefei in 1985 when he had to take the train from Beijing, Zhejiang University picked Hawking up after he landed in the nearby metropolis of Shanghai in the only vehicle designed for the disabled in the province.
On August 15, Hawking made a public speech on a “Brave New World” at Zhejiang University’s stadium. The venue, with a capacity of 3,000, was full to bursting, and some students even climbed up on the roof. Wu said Hawking’s appearance fee was 50,000 pounds (US$70,200) then, but he charged no fee to the university; even so, tickets were changing hands for around 500 yuan (US$80), with many students coming from nearby cities.
Hawking enjoyed his stay in Hangzhou, touring the West Lake, where he saw the lotus flowers, and visiting The Three Pools Mirroring the Moon, a scenic spot older than Cambridge. Wu accompanied Hawking throughout the trip.
“During dinner, Hawking wrote down the words ‘In China, do as the Romans do’ on the screen of his speech synthesizer. Moments later, he continued: ‘Just like the trip in 1985, people gathered around me because I was in a wheelchair,’” Wu told our reporter.
In Beijing, Hawking visited the Great Wall for the second time. On his first visit in 1985, the Great Wall had no facilities for the disabled. “Hawking threatened to commit suicide if he could not visit!” Wu said, adding that several male graduate students had to carry Hawking and his wheelchair up to the Great Wall. His second trip was much easier because a sightseeing cable car was already in place.
Divine Way
From June 17 to June 24, 2006, Hawking made his third visit to China and delivered a speech at the Strings 2006 conference (an annual gathering of top-level physicists), that year held in Beijing. Beforehand, Hawking had invited Wu to Cambridge to discuss the details of his visit. Wu went back to Beijing from the US and stayed with Hawking during his entire stay.
The second day after his arrival, Hawking went to the Temple of Heaven, a place for emperors to worship heaven during the Ming and Qing dynasties (1368-1911). The staff prepared a special slope for him from the entrance. Four young men helped carry his wheelchair.
When they were on their way to the main building, the Hall of Prayer for Good Harvest, Hawking suddenly asked to stop. Everybody thought he wanted to go back because of the hot weather, but then two words appeared on the screen of his speech synthesizer: Marble Way. The crowd burst into laughter. There are three walkways to the top of the temple – the right for the imperial families, the left for civil and military officials, and the central one is the marble way, used by Chinese emperors. In front of the Hall of Prayer for Good Harvest, Hawking asked Wu to take a photo of him. Later that evening he asked: “Where is my photo of the ascent of K2?” For Hawking, the 27 steps up to the hall were as high as the world’s second-highest mountain. Hawking later put the picture in his biography, My Brief History.
During this trip to Beijing, his last to China, Hawking made two speeches which received widespread media coverage, particularly on China’s burgeoning online community. For safety reasons, security guards had to patrol the floor of the hotel where Hawking was staying 24 hours a day.
To save time, Wu had gathered questions from reporters in advance, but Wu said even the day before the speech, there were no appropriate questions. Most of the Chinese reporters wanted to know what Hawking thought of China’s technological achievements, or when he thought a Chinese scientist would be awarded the Nobel Prize. “It was just like a woman asking if she’s beautiful,” Wu said.
During the press conference, however, Hawking answered questions from Chinese reporters with great pleasure. “I like Chinese culture, Chinese food and Chinese women in particular. They are really beautiful,” Hawking said. 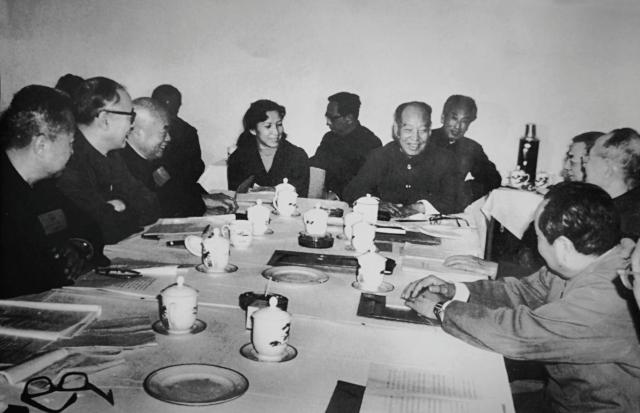 Bringing China Up to Code 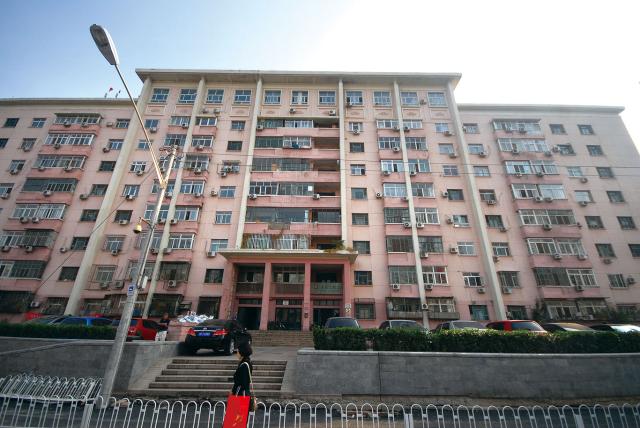 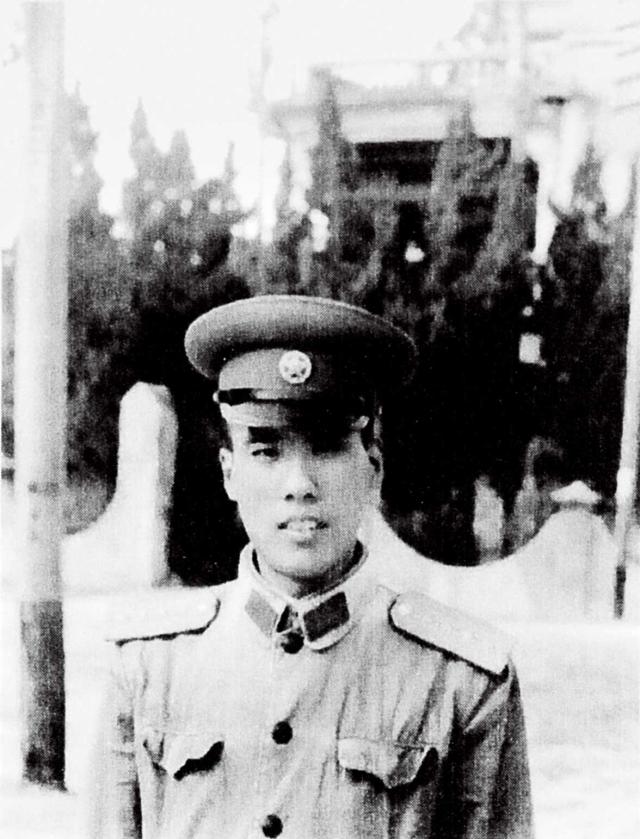 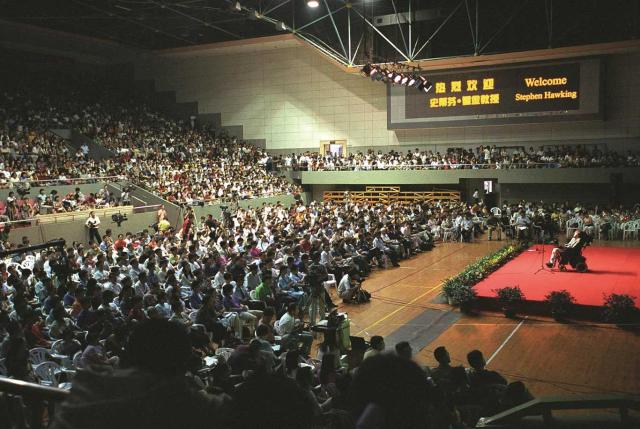