Seventy-year-old editor Wang Ruiqin has never forgotten the summer afternoon on August 30, 2000 when the State-run People’s Literature Publishing House held a press conference announcing it had acquired the rights to publish the first three installments of the Harry Potter series.
Director of the children’s literature desk, Wang was key in bringing J.K. Rowling’s wizarding works to China. Harry Potter and the Goblet of Fire, the fourth in the series, had just been released. The press conference in Beijing drew attention from around the globe. People were eager to know if the world’s most populous country would embrace the magic world of Hogwarts or remain indifferent muggles. ��
“The room was filled with foreign reporters. I didn’t there were so many foreign reporters in our country. They carried huge cameras and bombarded me with questions in extremely fluent Chinese. One of the most frequent questions was whether such Western fantasy fiction was suitable for Chinese children to read,” Wang told NewsChina.
Wang responded: “Now you can easily find a McDonald’s or a KFC on street corners in Chinese cities. Chinese kids love them. They accept McDonald’s and surely they can accept Harry Potter.”
She was right. The franchise was no less of a success in China than in other parts of the world.
Who Is J.K. Rowling?
2020 marked the 20th anniversary of Harry Potter’s arrival in China, and more than 30 million copies of the series have been sold in the country. Harry and his friends accompanied a young generation of Chinese. While these earliest fans may have long since grown up, many remain blissfully bewitched by the world of Harry Potter.
But 20 years ago, bringing a British children’s book about magic to China was a long journey full of challenges and doubts.
In the winter of 1999, Wang Ruiqin was a bit stressed. The new children’s literature department was founded by Nie Zhenning, president of People’s Literature, at a time when the genre was largely overlooked by literary circles and the public.
Starting the children’s literature desk was a reaction to the boom in commercial publishing in the late 1990s. Wang was looking for a project to start off her new job with a bang.
The publishing house had a large reading room where Wang spent a lot of time flipping through English and French magazines in search of ideas. In late 1999, she noticed a female writer who was in almost all the foreign magazines. Harry Potter and the Prisoner of Azkaban, the third novel in the series, had just been released. Staring at a photo of the proud author holding her latest book beside a train at King’s Cross, London, Wang could not resist asking: “Who on earth is J.K. Rowling?”
At the time, China’s internet was still in its infancy. Wang and the other editors scoured for information about Rowling and her books on the office’s only computer. After careful research, Wang was convinced that the Harry Potter series was exactly the project she was looking for.
But tracking down Rowling was another problem. The internet was so underdeveloped that Wang could not find the author’s contact information no matter how hard she tried.
“There was nothing but this resolute idea in my mind – I must find her no matter what,” Wang told NewsChina. “I had faith in myself that I would get the publishing rights.”
Wang got the contact for Rowling’s literary agent, Christopher Little, through a reporter who had returned from the UK. “It was like a welcome rain after a long drought. I hugged the reporter tightly and couldn’t help yelling, ‘You’re a lifesaver!’” Wang said.
In the early 2000s, before China joined the WTO, Chinese publishers – no matter how influential they were at home – were new to foreign publishing agents. Besides People’s Literature, many other major publishers in China, such as Yilin Press, Guangming Daily Press and Jiangsu Juvenile & Children Publishing House, competed for the rights to the Harry Potter series.
Looking to impress Little, Wang faxed him dozens of documents in which she expounded on the unparalleled achievements of the People’s Literature in introducing foreign books to China over the past 50 years.
Furthermore, Wang offered him a US$10,000 advance for each of the three books – an astronomical price among Chinese publishers at the time.
While negotiating royalties, Wang outlined prices based on volume and even gave a number for one million copies.
“Actually we weren’t sure whether we would really publish one million copies, but we had to show Rowling and her agent we were confident we could,” Wang told NewsChina, adding that reaching 10,000 copies in the early 2000s was considered a commercial success. 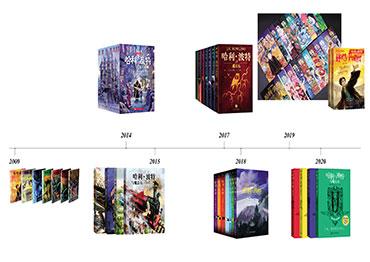 Supernatural Stigmas
As the series was written by a female author, Wang decided to enlist female translators. The first three books were translated by four female translators – Cao Sulin, Ma Ainong, Ma Aixin and Zheng Xuming.
Cao Sulin, then 70, was an experienced translator and daughter of Cao Jinghua, a notable translator of Chinese modern literature. Cao translated the first eight chapters of the first book, Harry Potter and the Sorcerer’s Stone, which laid the stylistic foundation for the series. To translate fictional names such as “Flourish and Blotts,” “Knockturn Alley,” “Diagon Alley” and “Gringotts,” Cao used vivid Chinese expressions that captured the magical world’s charm. “Cao Sulin is a great English and Russian translator. She has a particular affinity for children’s books. She’s like a child in her 70s,” Wang said.
However, Cao had concerns about whether a book so focused on magic could be published in China. She was not alone.
Associated with supernatural forces and superstition, magic is generally considered taboo according to traditional Chinese values, a view established in The Analects, which states: “Confucius did not speak of strange events, violence, riots and supernatural beings.” This was reinforced after the founding of the People’s Republic of China in 1949. Practices of sorcery, divination, fortune-telling and exorcism were chastised as feudal superstitions that went against the dominant ideology of Marxist materialism.
The theme was problematic as children’s books at the time were mostly educational and often promoted science and atheism. Though the leash has been loosened compared with the past, magic remains controversial. As late as 2020, the National Radio and Television Administration (NRTA) issued guidelines against portrayals of magic and the supernatural in film and television.
“A translator I reached out to said ‘The book is full of magic. You should know I’m a Party member and I can’t risk making political mistakes. Contact me next time when you have some regular children’s books,’” Wang said.
However, the editor remained optimistic. “Magic has always been a part of Western folk culture. Werewolves, vampires or wizards – these elements all reflect the history and culture of particular countries. In Chinese culture, we also have stories of ghosts and spirits in classics such as Strange Stories From a Chinese Studio and Chronicles of the Eastern Zhou Kingdoms.
“What’s more, the themes in Harry Potter involve love, courage, friendship and the triumph of good over evil. These are values encouraged in every culture. Children around the world are crazy about the books. I thought Chinese children would also love them,” Wang said. 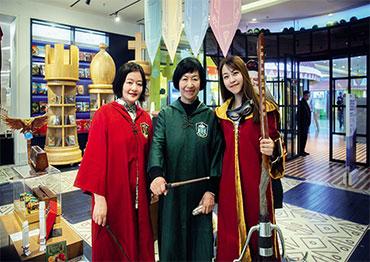 Wang Ruiqin (middle), Mai Ainong (left), one of the Chinese translators of the Harry Potter franchise, and a Harry Potter fan pose at a fan event

The Magic Continues
On October 6, 2000, the book launch ceremony was held at Beijing Wangfujing Bookstore, where 2,500 copies sold in the first hour. The following year, more than 1.5 million copies of the first three books were sold in China.
The introduction of the Harry Potter franchise heralded a new era for the country’s publishing industry. Ever since, Chinese publishing agents have increasingly sought out rights to books from overseas and attended international book fairs.
The franchise had a tremendous influence on China’s literary writing. It sparked a wave of children’s fiction about magic and also played a part in the birth of Chinese fantasy fiction.
“Chinese readers began to get familiar with the setting and features of Western fantasy literature. Chinese writers developed their own fantasy literature ecosystem, which is heavily influenced by Western fantasy works. Now the genre has grown quite mature in China. In fact, today lots of Chinese writers of children’s and young adult fiction are Harry Potter fans,” Wang told NewsChina.
But the editor disapproves of Chinese children’s writers seeking only to cash in on the trend. As a senior editor of children’s literature, Wang said that writers should appreciate the depth of the genre instead of writing shallow and valueless stories for kids.
“Children’s fiction is not an easy genre to write. To some extent, it might be more difficult. This genre should have its own depth. Many adult writers assume that 9-year-olds don’t think about life’s big questions. But actually they do. Whether it’s death or the complexity of human nature, they do understand these issues,” Wang said.
A masterpiece of children’s literature, the Harry Potter series takes life and death head-on as one of its main themes. Wang said that the series delivers a clear message: everyone faces death.
“It’s totally fine to have our children think about life and death. Everyone encounters difficulties and darkness in life, but we should face these trials bravely instead of flinching and running away. Just like Harry in the final book, he’s just 17, still a teenager, but he faces the critical moment of life and death quite bravely,” the editor said.
In 2011, Wang started a firm to handle copyright protection for the Harry Potter series and Rowling’s new books. All her young employees are Harry Potter fans, and often cosplay with wizard robes and magic wands for events. They have each chosen Hogwarts houses.
They think Wang, who is smart and wise, belongs in Ravenclaw. Wang does not agree, though she admits to taking an online test that said she was indeed Ravenclaw material.
“But I always thought I belonged in Gryffindor, the house of courage. I think what [Hogwart’s headmaster] Albus Dumbledore said is quite right – ‘It is our choices that show what we truly are, far more than our abilities,’” Wang told NewsChina. 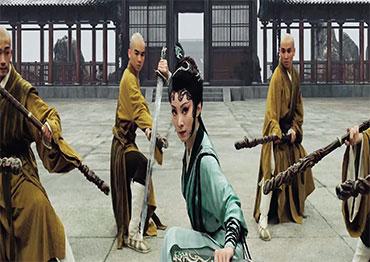 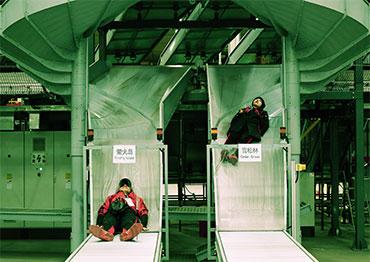 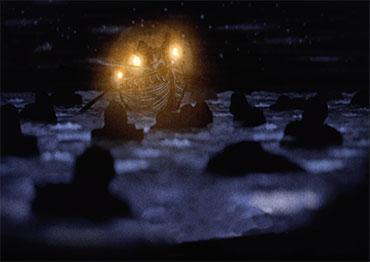