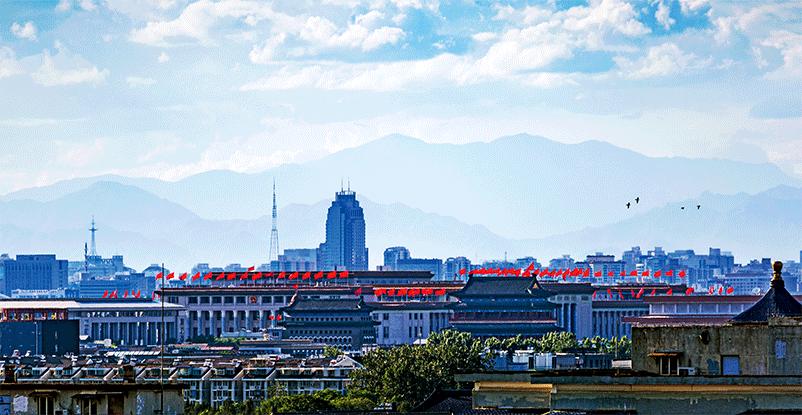 For the first time in decades, China has abandoned its GDP growth target for 2020 to focus on stabilizing the economy and safeguarding jobs amid the ongoing coronavirus pandemic

After two months of delay because of the coronavirus outbreak, China held its annual two sessions in late May. As a keynote event on China’s political calendar, the annual National People’s Congress (NPC) and Chinese People’s Political Consultative Conference (CPPCC) sessions serve as major platforms for China’s decision-makers to present their policies.
Given the challenges posed by the health crisis, from economic turmoil to deteriorating relations with the US, the two sessions this year were significant as China sits at a critical juncture for its economic and diplomatic policies.
No Number
A focus of the NPC session was the annual GDP growth target, which many interpret as an overall indicator for China’s economic policy. In 2019, the government set its growth rate at 6 to 6.5 percent.
But in the government work report delivered by Chinese Premier Li Keqiang, there is no mention of a specific GDP growth target for the first time in almost two decades. To most observers, the move to abandon a numerical growth rate came as no surprise, given the economic disruption and uncertainties caused by the ongoing coronavirus pandemic. China’s economy in the first quarter dropped by 6.8 percent.
Zhang Liqun, a research fellow at the Development Research Center of the State Council, told NewsChina that abandoning a specific growth target is the most sensible thing to do. “It’s meaningless to set an annual growth target in the middle of the year.”
While quite unusual, giving up on a growth target is not unprecedented. The last was the three-year period between 2000 and 2002 in the aftermath of the Asian financial crisis, which struck in 1997 and caused an economic meltdown across Asian countries.
“Back then, China faced serious economic difficulties and was challenged by great uncertainties, especially in 2000 and 2001,” Liu Yuanchun, an economist and vice-president of the Renmin University of China, told NewsChina. Liu said that China now faces a similar situation, as the coronavirus pandemic continues in much of the world and triggers political, economic and social unrest.
“Focusing on GDP growth could distract China from the core issues that it needs to address,” Liu said.
‘Soft’ Indicators
Instead of focusing on a GDP growth figure, the government report laid out several “softer” economic indicators. For example, it pledged to create an additional nine million jobs in urban regions and keep the unemployment rate between 5.5 percent and 6 percent. In 2019, China created 13.52 million new urban jobs.
The central government pledged to limit consumer price index (CPI) growth to 3.5 percent, compared to 3 percent last year.
The government also pledged to ensure that growth in individual income would be in line with overall economic growth. It vowed to eradicate absolute poverty in rural regions and to increase the average income of all counties officially designated as impoverished.
Ensuring people’s livelihood and employment was among the report’s top priorities. The words “livelihood” and “employment” were mentioned 21 and 39 times, compared to 10 and 25 times last year.
“These targets reflected a bottom-line mentality regarding China’s approach to its macro-economic policy by focusing on the primary concerns of the economy and seeking to grasp the certainties amid the uncertainties,” said Gao Peiyong, vice president of the Chinese Academy of Social Sciences.
The approach conforms with the guideline from a politburo meeting held on April 14, when the central leadership outlined six major areas for the government to prioritize. Dubbed the “six guarantees,” the leadership vowed to ensure adequate employment, secure basic livelihoods, protect market players, safeguard food and energy security, stabilize the industrial supply chain and maintain normal functioning at the grass-roots level.
But to achieve these goals, the government needs to drastically expand spending, which is challenging given many local coffers were depleted during the health crisis.
In the first four months of 2020, overall government revenues decreased 14.5 percent. In some cities and counties, revenues were more than halved. “Given the combined impact of the economic slowdown and massive tax cuts to deal with the health crisis, some regions, especially in central and western China, will see a drop in government revenues this year,” Chan Yan, mayor of Guiyang, capital of Guizhou Province in Southwestern China, told NewsChina.
To boost financial resources, Premier Li pledged that China would increase its deficit-to-GDP ratio from 2.8 percent in 2019 to 3.6 percent, an injection of 1 trillion yuan (US$140b) of government revenue, into the economy. In the meantime, the central government would issue another 1 trillion yuan in special treasury bonds.
To make sure funds are used more effectively, the government has set up a special payment mechanism to have funds sent directly to city and county level departments.
“By allocating 2 trillion yuan (US$280b) to local governments directly, the central government has to limit its own spending to ensure effective economic operation at the grass-roots level,” said Liu Yuanchun, “It’s a special arrangement of financial power between the central and local governments.”
Besides funds from the central coffers, local governments can issue special bonds collectively worth 3.75 trillion yuan (US$524b), or 75 percent more than last year. The funds will focus on new infrastructure, urbanization and major civil engineering projects, which officials believe are key to creating jobs and boosting consumption. 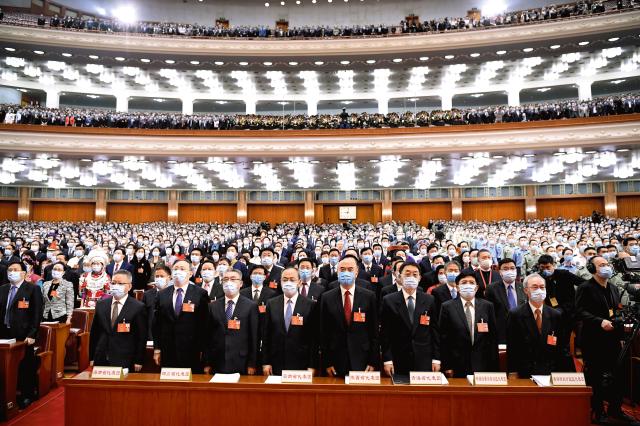 The third session of the 13th National People’s Congress (NPC) opens at the The Great Hall of the People, Beijing, May 22, 2020

Guiding Growth
For many experts, despite the lack of a designated national GDP target, China still needs to maintain a considerably high growth rate to achieve its economic goals.
Liu Yuanchun, for example, told NewsChina that based on his team’s estimates, the economy must grow by over 4 percent in 2020 for the government to achieve its employment and livelihood targets. “If the growth rate is below 4 percent, it will be impossible to create nine million new jobs in urban regions,” Liu said.
Based on the government’s targeted 3.6 percent deficit ratio, another study by Li Xunlei, chief economist of Zhongtai Securities, projected a GDP growth rate of between 3-4 percent.
According to Zhang Liqun, the absence of a national growth target will give local governments more freedom to make adjustments. In the past few months, provinces have released their own targets. Sichuan Province, for example, is eying a GDP growth rate of “2 percent higher than the national average.”
Provincial capitals have also set specific targets. Hohhot, capital of Inner Mongolia Autonomous Region, is aiming for 6 percent. Hangzhou, Zhejiang Province and Jinan, Shandong Province have targeted 6.5 percent. Some are even more ambitious. Taiyuan, Shanxi Province has set 7 percent. Xi’an, Shaanxi Province will reach for 7.5 percent.
According to Li Daokui, director of the Center for China in the World Economy at Tsinghua University’s School of Economics and Management, given the prolonged impact of the pandemic, China should adopt more long-term economic policies for the next few years instead of setting annual goals.
“The best-case scenario would be that China regains a growth rate of 6 percent or higher in two or three years,” Li said. 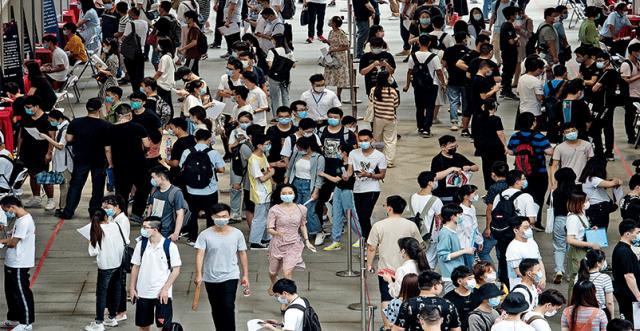 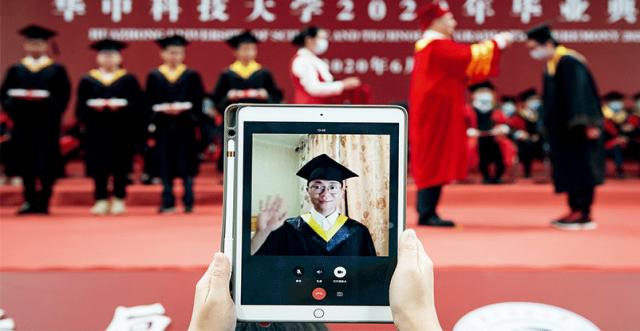 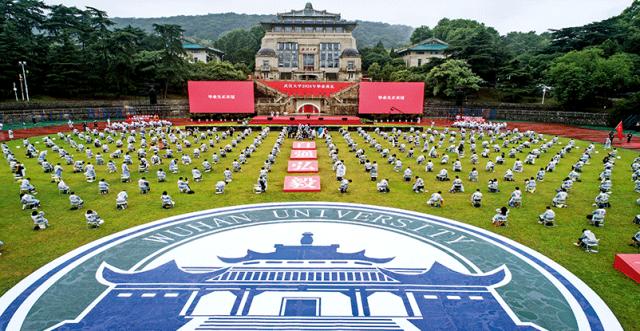