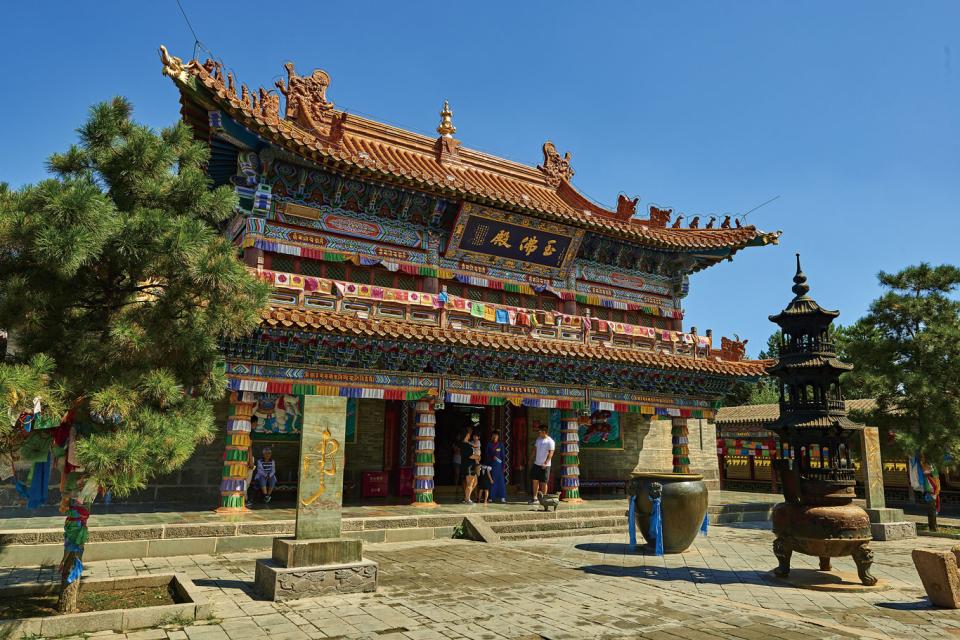 While a winter visit to the capital of Inner Mongolia requires a strong constitution, there are plenty of ways to warm up

Riding a motorbike into the capital of the Inner Mongolia Autonomous Region is a slow climb up and down gently rolling hills. Steep rocky mountains lie on both sides of the highway, occasionally uncovering plains with dotted boulders. Hohhot is certainly not its friendliest during the winter season, but I see a certain charm in visiting Chinese cities outside of their usual opening times. The crisp skies of the Hohhot mean temperatures dropping to double digits below zero and it pushes travelers to seek thick cotton-stuffed pants. Pro tip for cold season visitors: layer up and grab some heat patches, as a ski jacket alone is not enough.
Hohhot has been the capital of Inner Mongolia since 1947 and currently boasts a population of more than 2.5 million. Given the broad streets and stretched city, visitors can enjoy plenty of personal space and only get to feel the crowds in the main square and shopping streets. Hohhot is nestled in a valley encircled by mountains, which on clear days seem to be within touching distance. The locals are relaxed and easy going, but with a rather heavy dialect which take a deciphering skills if you are looking for a chat.
Hohhot appears to stand as a non-apologetic reminder of attempted multiculturalism. That attempt (at least on the exterior) looks relatively successful. While it does pack a slightly cringy version of folklore, it still is eye candy. The street dividing the town from north to south, Dabei Jie, is crammed with eclectic architectural artifacts. A Catholic church, Buddhist monastery, a mosque, and countless Islam-inspired buildings find a spot here. Start with the Great Mosque, which is surrounded by small stores selling all sorts of halal sweets, dried beef covered in different spices and headscarves. If you are visiting the mosque in summer, be sure to wear appropriate attire, otherwise you will not be allowed to enter. Unlike those in Beijing that are often a mix of Chinese and Islamic architecture, the Great Mosque boasts a distinctive Middle Eastern style with green used generously for decoration.
Just 100 meters south of the mosque, Buddhist monastery Da Zhao Temple is the largest in the city and was constructed in 1579. As it is quite sizeable, it will require at least two hours to look around. Be ready for the swamp of beggars and incense sellers in front of the gate who will try to get money out of your pockets and get uncomfortably close. Giving even the smallest notes might be the easiest way out.
After feeding the spirit, it might be time to attain some material goods. Dazhaoqian Jie just south of the square is a feast of sounds, smells, and sights. Vendors sell cups of steaming salted Mongolian milk tea and it is a “must-have” to sip on while browsing through knickknacks around the stalls and shops, dotted on each side of the street. While looking for souvenirs to bring home, I notice “milk alcohol.” It is certainly one of the more impressive gifts, especially because
it’s poured into a pouch that looks like an animal’s stomach that comes with its own little drinking cup. Milk alcohol itself is certainly easy to drink compared to the traditional Chinese baijiu, but it sneaks up on you with an aftertaste that is suspiciously similar to Mongolian milk candy. At least you know the origin. For the younger visitors, the plethora of milk candy varieties should satisfy every picky eater. The mobile food vendors often nestle in the square by the monastery itself, so street food is plentiful and varied.
The small streets just north of the temple (as well as the west side of Dabei Jie) are home to an unlikely but nevertheless fascinating destination for visitors. The abundance of small shops here all hold items that are used for the afterlife. From the usual fake money to sets of cosmetics for women and cigars for men, houses of all styles, clothes, and even cars – these stores supply anything your late relatives might require in the afterlife. Mind you, it is all made out of paper or plastic and is meant to be burned during the burial ceremony. The shopkeepers are warm and were not bothered about me just taking a look and were more than willing to share which items are the most popular. One of the shops holds a large collection of high-quality fabrics and the owner admitted people often just buy clothes for themselves to wear. 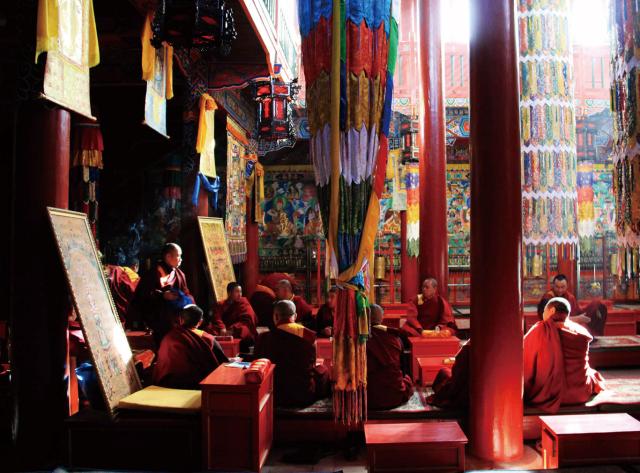 Practicalities Getting around: Hohhot is in the process of building a subway, which means entire sections of streets are fenced off by blue construction walls and there are immense holes in the road. However, buses are plentiful and cheap, as are taxis. Getting there: Hohhot’s Baita International Airport is conveniently located in the northeast of the city with regular flights to Beijing, Shanghai, and other large cities. If time allows, the train or bus to Beijing takes about 11 hours and offers beautiful scenery.

Besides the halal snacks, the must-try in Hohhot is Mongolian hot pot. As a hot pot lover but still a newbie, I’m used to the sight of flaming-red Sichuan broth over a burner, so the Mongolian cuisine did confuse me at first. A copper dish was brought out on the table with only plain water. “Are we not supposed to choose a broth?” I asked the waiter. “No, this is how Genghis Khan used to eat his hot pot.” Well, if it was good enough for Genghis, it is good enough for me. With only a few cracked peppercorns and goji berries for light flavor, the food retains its original taste and is not overpowered by numbing spice. Luckily for me, Genghis Khan also liked sesame paste with his hot pot, as do I.
After a good meal it was time to explore what the local urbanites do after dusk. The evenings in Hohhot bring even larger crowds to the center of the city, but I felt a need for some adventure and headed to one of the dozens of semi-secret bars inside residential compounds. The largest concentration is found around Zhongshan Xijie (especially in Mei Liang Square complex, building B.) The small bars are in converted residential apartments, with little to no official marking on the door. Entering the building, you have to navigate the sea of signs for different bars and pick according to the best sounding names or just by intuition. Most of them are high up, revealing a beautiful panorama of the city, but as I visited late at night, I had to knock on the door until the owner woke up and let me in.
Hohhot is a city of warm hospitality, a great variety of food and drink and unexpected sights, which leaves you feeling warm and cozy inside. There’s enough to do for a weekend trip, but if you have more time to spare, the grasslands and deserts lie just a few hours away. 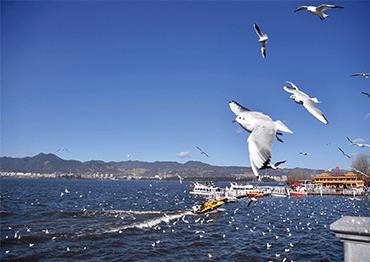 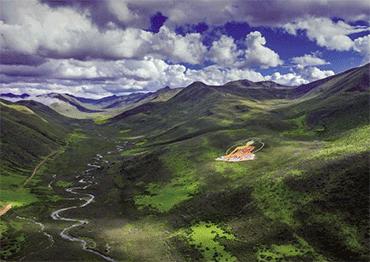 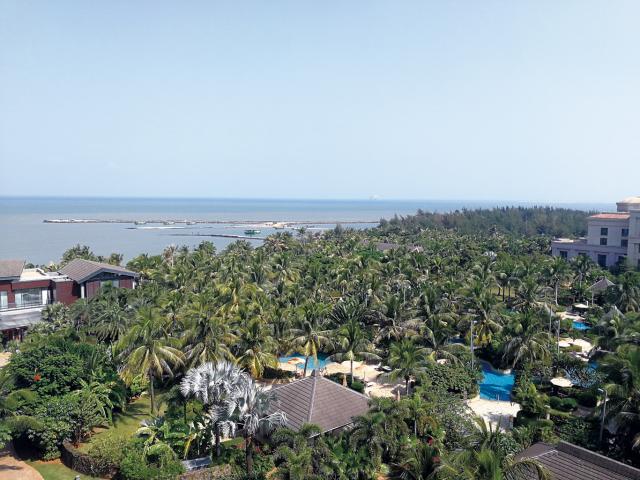 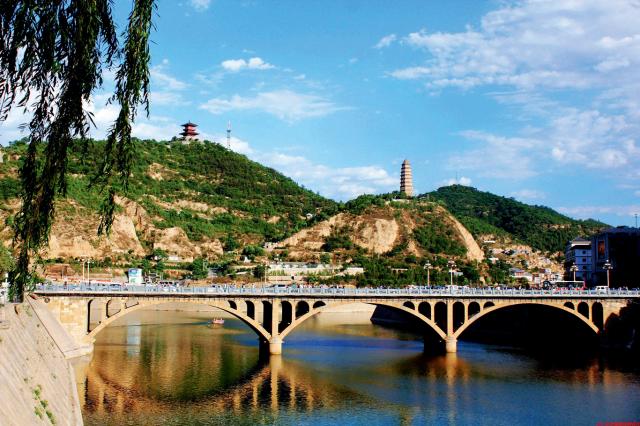